When it comes to disasters, Experience really is the best teacher.

That's why LeadersLink is harnessing the real-life lessons of elected leaders who have been there - facing floods, fires, tornadoes, hurricanes, mass shootings and more. Using that wisdom, mayors and county officials from around the country can learn how to prevent disasters, respond when they happen and lead a robust recovery.

From 1985 to 2000, the United States averaged 60 presidential disaster declarations a year. Since then, the average has soared to more than 120 a year. The annual cost of natural disasters in our country has doubled over the last two decades.

LeadersLink is creating a new culture of preparedness

How? By pooling what our leaders learn and putting it at the fingertips of those who need it. We are constantly interacting with disaster veterans and sharing their experiences and insights on our homepage. After a crisis, we partner any elected official who asks with a "disaster mentor" who successfully led their community through a similar event in the past. Leaders can also submit questions about any aspect of disaster prevention, preparation, mitigation, response or recovery to our knowledgeable team.

LeadersLink has a deep bench of disaster experts who offer information tailored for city and county decision makers. Our Resource Hub outlines free pre- and post-disaster goods and services available from nonprofit organizations, the government and private sector donors around the country.

LeadersLink holds recovery seminars in areas hit hard by disasters and pays for disaster mentors and the elected official they're partnered with to travel to one another's communities and see the recovery firsthand.

In 2016, LeadersLink received a grant from the United Nation's ARISE program to preserve the lessons learned of those who led their communities successfully through Hurricane Katrina, the worst natural disaster in U.S. history. Leading Through the Storm has won high praise from elected officials as well as emergency managers for its impactful message. 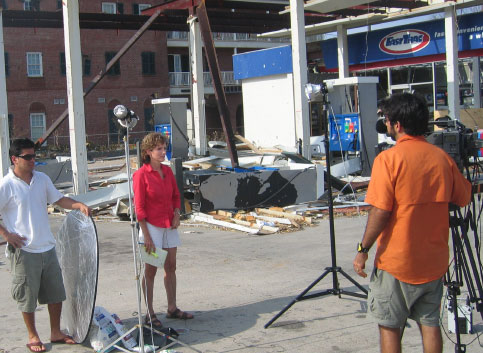 LeadersLink was founded by Kathleen Koch, a network television correspondent with decades of experience covering disasters from tornadoes and floods to 9/11 and the D.C. sniper attacks. In 2005 when reporting on the destruction of her Gulf Coast hometown by Hurricane Katrina, she saw how cities with strong leadership flourished while those without it faltered.
When Superstorm Sandy struck the East Coast, Koch recognized how much mayors on the Jersey Shore needed the advice of Gulf Coast mayors who were now disaster pros. She began linking them up and the partnerships made a significant difference in the communities' recoveries. Koch realized then the value of a powerful network drawing on leaders' firsthand knowledge.